Observation of some lacks, in private area to conduct research or collect scientific data, incited the creation of this scientific structure. IDAC is exclusively a panel of multidisciplinary scientists and high competence:

IDAC registration took effect since 1996, and was noticed by the Ministry of Interior of Benin,

THE LOGO & THE AIMS PURSUE 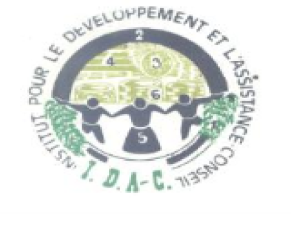 IDAC (Institute for Development and Consulting Assistance) is not:

– a governmental structure
– a political party
– a club of business opportunities

IDAC is a structure registered under Nonprofit Association (ASBL) law. Law of 1901

IDAC pursues only one goal: Research, trough his team of scientists. The most specifics objectives are:

In 1996, an old senior researcher thought to create an Institute which can integrate various areas of science. That’s was the little story of creation of IDAC (Institute for Development and Consulting Assistance) by: Doctor Finagnon Mathias OKE (1937 – 2005). He was:

A summarize of his scientific life

THE STRUCTURE AND THE FUNCTIONING

The President must direct one of the four Departments,and must have an advice on all missions which are done by the Institute.

The Scientific Committee regroups some scientists of the four departments to decide the main scientific activities, given authorization and so.

As it was noticed before, all scientists are registered in various universities (Benin, Nigeria, South Africa,Lille/France)

Consulting Assistance) has a unique administration composed by:

The financial resources are deriving from:
– His audits (for industries, for governmental agencies, farms);
– His trainings;
– Grants, donations and bequests.
Each research pays 10 per cent of his monthly salary one time per year,for a minimal functioning of the Institute.